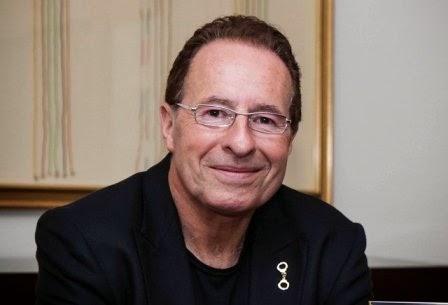 We had a wonderful time with Peter James, the British best-selling author of the Detective Roy Grace novels..

Peter was in South Africa to promote his latest novel, Want You Dead, as part of The Bloody Book Week. The guests were instantly taken by his opening declaration that the people in Johannesburg were the nicest he had ever met. His warmth, charm, and delightful sense of humour made the night one of our most enjoyable yet.

We also found out that Peter is passionate about researching his novels, creating a writing routine, and that Graham Greene changed the way he believed crime novels should be written. Most intriguingly, I learnt that some authors really do get their revenge in print by writing their enemies into their next novels.

1. Who is your favourite hero of fiction?
Sherlock Holmes, but the Sherlock Holmes of the original Arthur Conan Doyle novels. I enjoy his quirkiness.

2. What is your most treasured possession?
A sketch portrait of H.G. Welles. He is one of my heroes.

3. Which living person do you most dislike?
Martin Amis. We studied together at a tutorial college to cram for Oxford Entrance. Then the first film school in England started up and I decided that was what I wanted to do instead. In 2010 we were both nominated, in different categories, for a book award. I went up to him and wanted to say hello. He said he didn’t remember me, and that I only remembered him because he was famous. I was angry and his rudeness inspired me to tweet about the encounter. Ian Rankin offered me £100 to get my revenge in print. So I wrote Amis Smallbone, a villain with a tiny penis, into my next novel, Not Dead Yet. I have the £100 cheque from Ian Rankin framed and on display. Shortly after this happened, his new book came out at No 10. Mine came out at No 1.

From Not Dead Yet: “Amis Smallbone was, in Grace’s opinion, the nastiest and most malevolent piece of vermin he had ever dealt with. Five foot one inch tall, with his hair greasily coiffed, dressed summer and winter in natty suits too tight for him, Smallbone exuded arrogance. Whether he had modelled himself on some screen mobster, or had some kind of Marlon Brando Godfather fixation, Grace neither knew nor cared. Smallbone, who must now be in his early sixties, was the last living relic of one of Brighton’s historic crime families.”

4. What is your greatest fear?
I am terribly claustrophobic. Although, I did once spend 30 minutes locked in a coffin in a small funeral home for research purposes. I did not enjoy it, especially as the person who was left to let me out with was a very old man.

5. Who or what has been the greatest love of your life?
Lara, the lady I’m with now.

6. What is your greatest regret?
I didn’t finish reading for my original degree at Oxford.

7. If you could choose to be a character in a book, who would it be?
James Bond. I loved the era. It was less PC and he just had fun.

8. Which book have you read the most in your lifetime?
Brighton Rock by Graham Greene. The novel made me want to become a crime writer. Greene changed the rules for crime writing with this novel. His villain is a 17-year-old named Pinkie who leads a gang of middle aged misfits. Pinkie is also a Catholic and afraid of eternal damnation. The opening lines is classic: ‘Hale knew, before he had been in Brighton three hours, that they meant to murder him.’ I wanted to know who Hale was, why he was in Brighton and who wanted to kill him.

9. What is your favourite journey?
Driving to the south of France.

10. What is your favourite quotation?
‘I tell you, we are here on Earth to fart around, and don’t let anybody tell you different.’ ~Kurt Vonnegut

11. Dogs or Cats? Which do you prefer?
Emphatically dogs. And I’ll tell you why. You can do anything, come home, and the dog will still love you, but the cat will know if you’ve done something wrong. My dogs names are Phoebe and Oscar, after Oscar Wilde. Although we have a cat, 10 hens, alpacas, and lots more on the way.

12. What do you most value in a friend?
True friends know everything about you and still like you. I call them ‘Far-Weather Friends’.

13. What quality do you most admire in a woman?
Mental strength. They tend to think more and do more analysing.

14. Which book that you’ve written is your favourite?
I have two. Dead Simple because it was the first breakthrough book for me. And Perfect People – a standalone book about designer babies. We will see them in our lifetime.

15. What are your favourite names?
Roy – that’s the name of the detective in my series.
Lara – the name of the woman I share my life with now. I’ve always liked the name, though.

17. Which are your three favourite books?
Slaughterhouse-Five by Kurt Vonnegut
Brighton Rock by Graham Greene
The Silence of the Lambs by Thomas Harris

18. Where do you get your greatest ideas for writing?
From the police. I spend a lot of time doing the rounds with the police. I like to take true life situations and give my detective a puzzle to solve. I also go to homicide conferences. I do a lot of research. I always visit the place I will be writing about. I once wrote a novel set in Namibia, and I’d never been there. I stumbled through answers from journalists and I swore I would never write another book without visiting the setting.

19. What is your Writing Routine?
I write six days a week from 6pm to 10pm. This is a habit I got into when I was still producing films. I think a routine is essential if you want to take writing seriously. Although I can write anywhere if I have to, I like to write in my office at home in London.

20. What are your Top Writing Tips?

2.I have this holy trinity of writing which consists of Character, Research, and Plot.

3.Structure is important. Know your ending before you start writing. You wouldn’t just get into a car and drive without knowing where you’re going. Know your most important plot points. This does not mean that things won’t change, but you will never get stuck.

5.Once you start writing a book, make time to write every single day. Find a comfortable number of words for you to write each day and stick to that number. I am comfortable with 1000 words.

6.Love your characters. Even your villains. And the way to make a villain lovable is to give him something to love.

7.And one from Graham Greene: ‘Every writer has to carry a chip of ice in their heart.’

Follow this link for more photographs from the dinner with Peter James.