The Roswell Incident has always fascinated me – not just because I’m intrigued by conspiracy theories, but also because I find it impossible to believe that we are the only inhabited planet in the entire Universe. The vast majority of scientists I’ve talked to believe the same.  Of all the documented instances of possible UFO sightings, nothing has quite the magic or longevity of the name Roswell.

According to Wikipedia:  On July 8th 1947, Roswell Army Air Field (RAAF) public information office in Roswell, New Mexico, issued a press release stating that personnel from the field’s 509th Bomb Group had recovered a crashed “flying disk’ from a ranch near Roswell, sparking intense media interest.  The following day, the press reported that Commanding General of the Eighth Air Force stated that, in fact, a radar tracking balloon had been recovered by the RAAF personnel, not a “flying disc.” A subsequent press conference was called featuring debris from the crashed object, which seemed to confirm the weather balloon description.


I’ve just had the rare and great privilege to meet and entertain at my London home, Jesse A Marcel Jnr., the last surviving person who was in Roswell that night, and saw and touched the remains.  His story is very different to the official line, and after two hours of chatting to him, and his very delightful family, all very intelligent, sensible, straightforward people, I have absolutely no doubt that the truth of what really landed at Roswell has been – and continues to be – concealed from us.

Jesse qualified as a medic, an ear, nose and throat specialist, and was a military doctor for many years.  He spent part of his childhood in Roswell because his father, Major Jesse Marcell, worked for the Pentagon in a very high powered role, at Walker Air Force Base, near Roswell.  He was head of Security and Intelligence for Atomic Tests in the USA and Pacific and was the officer who, back in 1945, had the grim but historic task of briefing the crew of the B-29 Superfortress before their missions to drop the nuclear bombs on Hiroshima and Nagasaki.  He clearly was anything but a flaky individual – as some attempts were made to smear him subsequently – and, crucially, he had considerable insider knowledge of all the latest secret aviation technology that was under development.  When Jesse Snr subsequently maintained that what he helped recover from Roswell was not of this earth, he was one of the very few people actually in a position to make that judgement from an informed perspective.

The crash site was on a sheep station some distance from Roswell itself.  Jesse told me it was first discovered by a rancher who noticed that his sheep were refusing to cross part of their grazing land, and that’s when he saw the debris. Jesse’s father was sent there to investigate. He told me his dad brought home a foil like substance that had some form of code written on it.  He told his son “This is from a flying saucer – you will never see it again.”

Jesse described it to me in detail. He said it was very thin, like aluminium foil, with some kind of coding on it – but not any recognisable wording, or any form of writing that was remotely recognisable as being from this planet.  He said you could bend the metal, and it didn’t matter how much you bent it or how many times, it would instantly revert back to its original shape.

Jesse’s father was immediately put in charge of an operation to recover all of the debris and transport it to Washington. For a weather balloon, or even a cluster of the more secret Mogul monitoring balloons, as the official story was later changed to – there was a great deal of debris – spread over half a square mile. It took five trucks to collect it all and a massive USAF freight plane to fly it all to Washington.  Some balloon!

Were there dead aliens in the wreckage? Jesse was honest enough to tell me that he never knew for sure, as his father was forbidden to talk about it from then on, even to his family. But, he told me, his father did tell him that three coffins were in the plane that transported the wreckage to Washington….

Some years later, Jesse told me, the son of the rancher who made the original discovery was drunk in a bar and started boasting that he had kept a piece of that original metal, hidden in his home. A few days later, two men in suits with CIA ID turned up, saying he had a piece of US Government property and demanded it be handed over.

One question Jesse told me that he had gone over and over in his mind, and still does, is this: If this was just the wreckage of weather balloons, why was Washington so anxious to have every single bit recovered, and still continued to go after any remaining bits years later?

I heard from a US Government source that one of the first questions every new President of the US asks his Pentagon advisers is whether there is any truth in Roswell, and are there preserved alien remains being kept somewhere deep beneath the Pentagon? Jesse told me he had heard this is true, but there is something I did not know – and this is a little scary: US Presidents do not have the top level security clearance! There are several levels above them that they never attain – on a need-to-know basis.

Jesse told me that over the years, there have been a number of very well witnessed and documented sightings of UFOs that have been suppressed.  Among them, in 1961, four USAF fighters nearly collided with an object that sped away, and did not appear on any radar screen. In 1969 a UFO passed over all US nuclear silos in the USA and their computers crashed, putting the entire nuclear strike capability out of action for several hours. US Military leaders were instantly forbidden to talk about it.

So what did crash at Roswell on July 8th, 1947? Was it a top-secret, new US aircraft? If so, how come Jesse Snr did not recognise it as such, with all his knowledge and experience? And why did the first press release announce it was a flying disk, and then so very quickly have this retracted?

One possible explanation was given to me by a close friend in Los Angeles some years ago. His father was a rocket scientist, and for many years during his childhood, he said his father worked on studies of the crashed remains. I asked my friend if it really was true, that an alien space craft had crashed at Roswell, why did the US keep denying it and not just come clean and admit it had happened? His reply was that the US military believe that the technology to be gained by reverse engineering this craft will give them military superiority over the rest of the world for the next 200 years – if they did admit its existence, they would have to share it with the rest of the world.  To me, this has the ring of truth about it.

In the original film Men In Black, there is a scene where Will Smith and Tommy Lee Jones go into a vast hangar full of strange aliens.  Smith turns to Jones and asks, “Who’s paying for all this?” Jones replies, “Its all paid for from the profits of the technology we’ve got from the aliens – they gave us velcro and diapers.” The movie is a spoof but could it be, as they say, there’s many a true word spoken in jest…?

I asked Jesse what his views were on what my friend had told me – and the possibility we already have some technological inventions resulting from the work on the crashed remains. In his very candid and open way he said he would not be at all surprised…

In the X-Files are the famous words “the truth is out there.” I think in the case of the Roswell Incident, it is not out there at all. I think it is quite possible that it is being very well concealed. 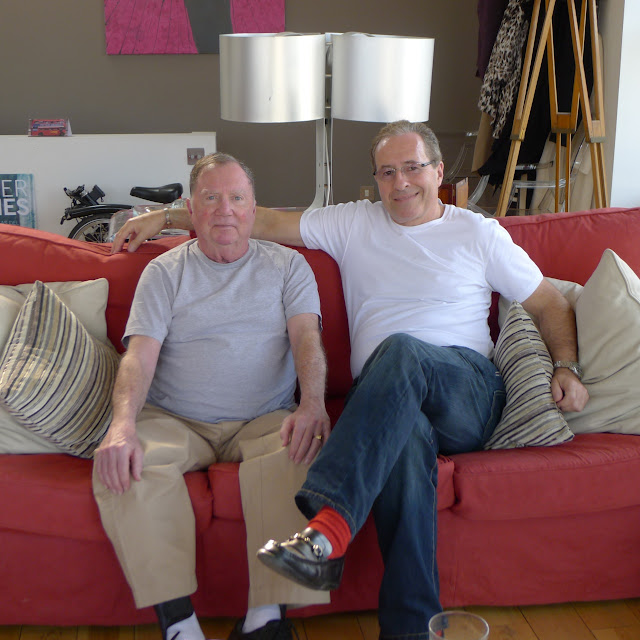 Peter with Jesse A Marcel Jnr
Go to Top