Need You Dead: Starts at 60

Need You Dead by Peter James is a book that I really wanted to end… because I truly couldn’t guess the ending. Although at times I felt the story was a little overcrowded with characters, it always held my attention.

Detective Superintendent Roy Grace is called to a flat in Brighton where a young woman is discovered dead in a bath. At first, it looked as though Lorna Belling, a hairdresser who worked from home, may have committed suicide. After all, where Lorna was found was not her home, but a place she rented monthly. However, as this story unfolds we learn… all is not always as it seems. 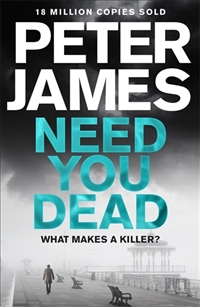 Lorna is married to Corin whose biggest claim to fame is his penchant for abusing his wife. He is a nasty unpleasant man who does all he can to intimidate and frighten Lorna and Lorna is determined to break the shackles and leave him.

She meets and falls in love with Greg Wilson who promises to leave his wife to be with her. The flat in Brighton where Lorna’s body is found has been their love nest for months. Lorna has had to report her husband’s abuse, yet again, when he covers her face in dog faeces and after he throws the puppies she has been breeding into the street. She is determined to get Greg to stop procrastinating and make a decision on their future. A client, back from holiday shows Lorna some photos of a couple she met. Much to her horror, the man in the photo is Greg, her lover. His name, however, is not Greg Wilson.

She is determined to get Greg to stop procrastinating and make a decision on their future. A client, back from holiday shows Lorna some photos of a couple she met. Much to her horror, the man in the photo is Greg, her lover. His name, however, is not Greg Wilson.

Lorna, realising that Greg isn’t who she thought he was, confronts him. They fight – he storms out of the flat in Brighton. The next morning the body of Lorna Belling is found by an electrician employed by the building owner to fix the faulty power lines in the building. Could it have been an accidental death?

Roy Grace needs to travel to Germany, following the death of his first wife, to bring his ten-year-old son home. He appoints Detective Guy Batchellor in charge in his absence, knowing Guy is a dedicated detective who will leave no stone unturned. When Roy returns he decides he will oversee the case but leave Guy in charge.

What looked to be a fairly open and shut case soon turns to disaster when Corin Belling, the prime suspect runs in front of a car after eluding police and is killed.

Who killed Lorna Belling? Was it her violent husband or could it have been her lover who was not who she thought he was? Could it have been a stranger who had planned to buy the deceased woman’s car? Maybe it was suicide or could the faulty wiring at their love nest been the unwitting culprit?

Curl up in a corner with no distractions and try to guess the ending – if you can.

Need You Dead by Peter James is available now from Dymocks. Click here to learn more.