British crime novelist Peter James, like many of his fictional characters, often encounters the police. But unlike the shady individuals emerging from his imagination, Peter enjoys the experience.

Peter often tags along with the police on his home turf in Brighton, Sussex. “I spend about a day each fortnight out with the police — sitting in cop cars, going to crime scenes, being in offices and attending meetings” said the best-selling author when interviewed this week during a visit to Hong Kong. “In a day with the police, you see a most incredible slice of life.”

Having befriended the law-enforcers, talked to them in depth and watched them for hours, even days, at a time, 59-year-old Peter can write about crime, criminals and investigations more realistically and accurately.

“I’m a great believer in research,” he said. “I love books when the writer understands the world. Then the readers get something extra. From the best stories, you learn something about the world and why people behave as they do.”

Grey-haired, charming and quick-to-smile, Peter doesn’t look like someone whose brain overflows with tales of murder and mayhem. But don’t be deceived.

When a protagonist needed to hoist a severed human head from a bathtub, Peter searched for a policeman with relevant experience. Soon he found one who’d located a “lost head” in the bushes after a rail-line suicide.

“It was late at night. They’d found the body, but not the head,” Peter said. “Walking down the line with a torch, the constable saw eyes peering out from a bush.

“He told me, ‘I walked to the back so the eyes couldn’t look at me. Then I didn’t know how to pick it up, so I lifted it by the hair. It was much heavier than I’d expected. Out of respect, I took off my jacket and wrapped the head in it. I put it in the boot of my car and drove it to the mortuary, but every time I braked or turned a corner, I heard it rolling around.’ ”

Sometimes Peter wears a lapel pin shaped like handcuffs. The police in Munich, Germany, gave him the pin when he consulted them for his 2007 novel, Not Dead Enough. The book’s hero, Detective Superintendent Roy Grace, is based upon a retired Sussex Police investigator named Dave Gaylor. Grace also stars in two earlier books, Dead Simple and Looking Good Dead. Another such novel, Dead Man’s Footsteps, will appear soon.

“Years ago when I first met Dave, I noticed 20 blue boxes piled on his office floor,” Peter said. “He told me, ‘Those are my dead friends.’ They were cold cases. As he said, ‘I’m the last chance those victims have for justice, and I’m their families’ last chance for closure.’ Dave was an active, modern homicide investigator, but he had all those ghosts in his office.”

According to Peter, “Police officers have the greatest overview of society. They have a common denominator and look at the world differently. If I see two guys peering into a shop window, I wonder what they plan to buy. If a policeman sees them, he wonders why they’re standing there – are they going to rob the shop, are they doing a drug deal, what’re they talking about? There’s a culture of suspicion.”

Last month, Peter spent an extra-long day with two shifts of the Brighton police. “At 7 a.m., we had a cot death with distraught parents and a terrible situation. At 11 a.m., a bus hit a Turkish student, who luckily survived. Then at 1 p.m., a car got stopped by chance, and the boot was full of drugs. At 4 p.m., an old lady drove off a road and got her car caught on a concrete bollard. At 11 p.m., we chased a stolen car and arrested a 15-year-old kid.

“Things happen that I could never make up,” Peter said. “About six months ago, I went along as the police arrested an armed robber holed up in a flat. They told me, ‘Keep clear of the door in case he shoots.’ I said, ‘Thanks, I’ll be well clear.’

“We arrived at an old, low-rise block of flats. The police rang all the doorbells, except for the suspect’s, until someone opened the front door. We went up to the second floor. When there was no answer, we smashed the suspect’s door off its hinges.

“A big, ugly guy inside bit a policeman on the nose and stabbed his fingers into another’s eyes. They wrestled him to the floor and handcuffed him. The guy said, ‘Bastards, you’d bloody well better fix my door. The last time you did this I got burgled.’

“Then the door of another flat opened. An old lady in a dressing gown came out. She had a thick Irish accent. ‘What the heck’s this noise?’

“They told her, ‘We’re the police. Would you mind stepping back inside?’

“She scolded, ‘I won’t get back. I rang you last week when I wanted something, and no one came.’ ”

One of Peter’s regular characters works at a mortuary. So he often visits such places. He recalls first witnessing a post-mortem.

“I saw three people on a Monday morning who’d been alive on Friday night,” he said. “I won’t go into the details, but it reduces humans to the status of meat on a butcher’s slab. I went home, looked at my wife and thought, ‘I know what’s inside you.’ I had to get drunk that night. For a long time, I had nightmares. But it was a good thing. It taught me. Now I’m more hardened to such things.”

Several times, Peter became an “honorary member” of the Sussex Police to attend overseas police conferences. When traveling, he ponders a theory. “The best and most exciting cities have strong criminal undertows,” he said. “In the US, I like Chicago, New York, Los Angeles and Miami. Strong criminal elements give those places an edge. They’re not calm or bland.”

Years ago, Peter lived in Toronto. But Canada may have lacked enough evil-doers to keep this crime-writer in material. Meanwhile, Brighton, with its quarter-million people, isn’t huge, but it’s “edgy” and crime-infested, home to “first-division criminals”.

Peter always enjoyed crime stories. As a child, “the stories about Sherlock Holmes riveted me. I read everything that Sir Arthur Conan Doyle wrote about him. Grace, the detective in my books, owes more than a nod to Holmes.”

Peter’s novels appear in 26 languages and also reflect his interests in medicine, science and the paranormal. His other titles include Prophecy, Alchemist, The Truth, Denial and Faith.

But is Peter doing the right job? Maybe he should have joined the police. “I wouldn’t be a good officer,” he said. “I’m not brave in that sense. I don’t want to confront 10 guys with knives down a dark alley. Instead, I’m doing what I love, telling stories and writing about the world and its people.” 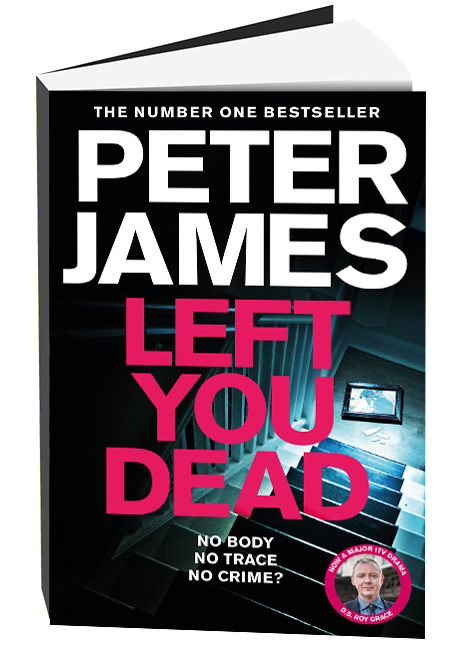