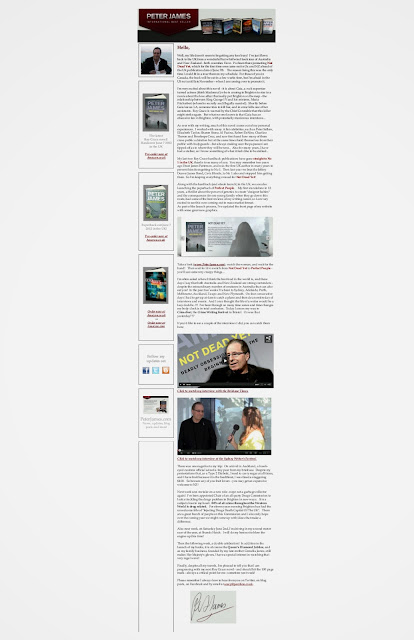 Well, my life doesn’t seem to be getting any less busy! I’ve just flown back to the UK from a wonderful but whirlwind book tour of Australia and New Zealand -­ both countries I love. I’ve been there promoting Not Dead Yet, which for the first time ever came out in Oz and NZ ahead of the UK publication date of June 7th . The reason being this was the only time I could fit in a tour there on my schedule. For those of you in Canada, the book will be out in a few weeks time, but I’m afraid in the US not until late November -­ when I am coming over to promote it.

I’m very excited about this novel -­ it is about Gaia, a rock superstar turned actress (think Madonna!) who is coming to Brighton to star in a movie about the love affair that really put Brighton on the map -­ the relationship between King George 1V and his mistress, Maria Fitzherbert (whom he secretly and illegally married). Shortly before Gaia leaves LA, someone tries to kill her, and in error kills one of her assistants. Roy Grace is warned by the Chief Constable that this killer might strike again. But what no-­one knows is that Gaia has an obsessive fan in Brighton, with potentially murderous intentions…

As ever with my writing, much of this novel comes out of my personal experiences. I worked with many A list celebrities, such as Peter Sellers, Elizabeth Taylor, Sharon Stone, Al Pacino, Robert DeNiro, Charlize Theron and Peneleope Cruz, and saw first hand how many of them crave public adulation but at the same time shield themselves from their public with bodyguards -­ but always making sure the paparazzi are tipped off as to where they will be next… Also for many years, I have had a stalker, so I know something of what it feels like to be stalked…

My last two Roy Grace hardback publications have gone straight to No 1 in the UK, thanks to so many of you. You may remember two years ago I beat James Patterson, and was the first UK author in many years to prevent him from getting to No 1. Then last year we beat the Jeffery Deaver James Bond, Carte Blanche, to No 1 also and stopped him getting there. So I’m keeping everything crossed for Not Dead Yet!

Along with the hardback (and ebook launch) in the UK, we are also launching the paperback of Perfect People. My first standalone in 12 years, a thriller about the power of genetics to create “designer babies” and the consequences for one young family when they go down this route, had some of the best reviews of my writing career, so I am very excited to see this now coming out in mass market format. As part of the launch process, I’ve updated the front page of my website with some great new graphics.

Take a look (www.PeterJames.com), watch the woman, and wait for the hand! Then wait for it to switch from Not Dead Yet to Perfect People -­ you’ll see some very creepy things…

I’m often asked where I think the best food in the world is, and these days I say that both Australia and New Zealand are strong contenders -­ despite the extraordinary number of creatures in Australia that can also eat you! In the past two weeks I’ve been to Sydney, Adelaide, Perth, Melbourne, Auckland, Taupo and New Plymouth. On four consecutive days I had to get up at 4am to catch a plane and then do an entire day of interviews and events. And I once thought the life of a writer would be a lazy doddle…!!! I’ve been through so many time zones and time changes my body clock is in total confusion. Today I am on my way to CrimeFest, the Crime Writing Festival in Bristol. Or was that yesterday???

There was one negative to my trip: On arrival in Auckland, a hawk-­ eyed customs official seized a tiny pear from my briefcase. Despite my protestations that, as a Type 2 Diabetic, I need to carry sugar at all times, and I have fruit because it is the healthiest, I was fined a staggering $400. So beware any of you fruit lovers -­ you may get an expensive welcome to NZ!

Next week sees me take on a new role -­ nope not a garbage collector again! I’ve been appointed Chair of an all-­party Drugs Commission to look at tackling the drugs problem in Brighton in new ways. It is a subject close to my heart. 80% of all crime throughout the Western World is drug related. For eleven years running Brighton has had the unwelcome title of “Injecting Drugs Death Capital Of The UK”. There are a great bunch of people on this Commission and I sincerely hope over the coming year we might come up with ideas that make a difference.

Also next week, on Saturday June 2nd, I’m driving in my second motor race of the year, at Brands Hatch. I will do my best not to blow the engine up this time!

Then the following week, a double celebration! In addition to the launch of my books, it is of course the Queen’s Diamond Jubilee, and as my family business, founded by my late mother Cornelia James, still makes Her Majesty’s gloves, I have a special interest in watching that very regal wave!

Finally, despite all my travels, I’m pleased to tell you that I am progressing with my next Roy Grace novel -­ and should hit the 100 page mark -­ always a critical point for me -­ sometime next week!