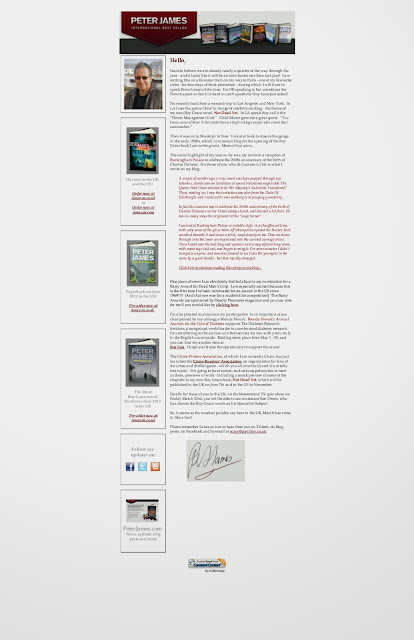 Hard to believe we are already nearly a quarter of the way through the year -­ and it looks like it will be an even busier one than last year! I am writing this on a Eurostar train on my way to Paris -­ one of my favourite cities -­ for four days of book promotion -­ during which I will have to speak French most of the time. I’m OK speaking it, but sometimes the French speak so fast it is hard to catch questions they have just asked!

I’m recently back from a research trip to Los Angeles and New York. In LA I met the police Chief in charge of celebrity stalking -­ the theme of my next Roy Grace novel, Not Dead Yet. In LA speak they call it the “Threat Management Unit.” Chief Moore gave me a great quote: “You know, some of these A-­list celebrities are high-­voltage people who create their own weather.”

Then it was on to Brooklyn in New York and back in time to the gangs in the early 1900s, which I am researching for the opening of the Roy Grace book I am writing next. More of that anon…

The social highlight of my year so far was my invite to a reception at Buckingham Palace to celebrate the 200th anniversary of the birth of Charles Dickens. For those of you who did not see it, this is what I wrote on my blog:

A couple of months ago a very smart envelope popped through my letterbox. Inside was an invitation to spend Valentines night with The Queen. Had I been selected to be Her Majesty’s Valentine, I wondered? Then, reading on, I saw the invitation was also from the Duke Of Edinburgh, and I realized he was unlikely to be playing gooseberry…

In fact the occasion was to celebrate the 200th anniversary of the birth of Charles Dickens a writer I have always loved, and learned a lot from. He was in many ways the originator of the “page turner”.

I arrived at Buckingham Palace in suitable style, in a chauffeured limo, with only some of the gloss taken off when police opened the bonnet, boot, searched beneath it and shone a torch, suspiciously at me. Then we drove through into the inner courtyard and into the covered carriage drive. Then I went into the building and upstairs into a magnificent long room, with name tags laid out, and began to mingle. For some minutes I didn’t recognize anyone, and was also pleased to see I was the youngest in the room by a good decade -­ but that rapidly changed.

One piece of news I am absolutely thrilled about is my nomination for a Barry Award for Dead Man’s Grip. I am especially excited because this is the first time I’ve been nominated for an award in the US since 1969!!!! (And that one was for a student film competition!) The Barry Awards are sponsored by Deadly Pleasures magazine and you can vote for me if you would like by clicking here.

I’m also pleased to announce my participation in an important cause championed by my colleague Brenda Novak. Brenda Novak’s Annual Auction for the Cure of Diabetes supports The Diabetes Research Institute, a recognized world leader in cure-­focused diabetes research. I’m contributing to the auction an afternoon tea for two with yours truly in the English countryside. Bidding takes place from May 1 -­ 30, and you can find my auction item at this link. I hope you’ll take the opportunity to support the cause!

The Crime Writers Association, of which I am currently Chair, has just launched the Crime Readers’ Association, an organization for fans of the crime and thriller genre -­ which you all must be (!) and it is totally free to join. It is going to have events, exclusive opportunities to meet authors, previews of work -­ including a sneak preview of some of the chapters in my new Roy Grace book, Not Dead Yet, which will be published in the UK on June 7th and in the US in November.

Finally for those of you in the UK, on the Mastermind TV quiz show on Friday March 23rd, you will be able to see contestant Ken Owen, who has chosen the Roy Grace novels as his Specialist Subject!

So, it seems as the weather pundits say here in the UK, March has come in like a lion!