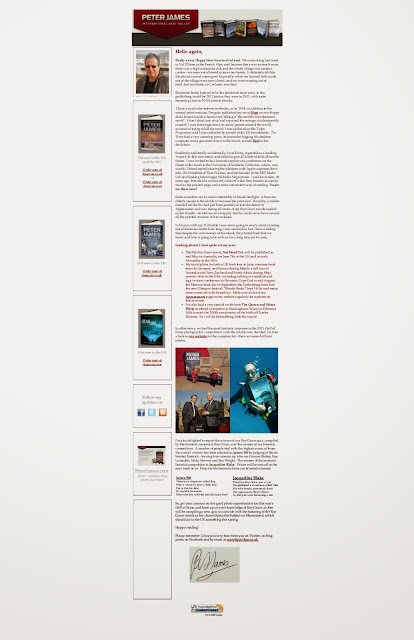 Firstly a very Happy New Year to all of you! We were skiing last week in Val D’Isere in the French Alps, and because there was so much snow there was a high avalanche risk and the whole village was under a curfew -­ we were not allowed to leave our hotels. It definitely felt like the plot of a novel coming on! Especially when we learned both roads out of the village were now closed, and we were running out of food…but not books, so I, at least, was fine!

Electronic books look set to be the dominant news story in the publishing world for 2012 just as they were in 2011, with sales becoming close to 50-­50 print to ebooks.

I have a particular interest in ebooks, as in 1994, in addition to the normal print versions, Penguin published my novel Host on two floppy disks bound inside a hard cover, billing it “the world’s first electronic novel”. I don’t think any of us had expected the outrage it subsequently caused! I was front page news on many papers around the world, accused of trying to kill the novel, I was pilloried on the Today Programme, and I was ridiculed by several of the UK broadsheets. The Times had a very amusing piece, its journalist lugging his desktop computer and a generator down to the beach, to read Host in his deckchair.

Suddenly, and totally accidentally, I was being regarded as a leading “expert” in this new arena, and asked to give all kinds of talks about the future. I was invited to be a keynote speaker at a conference on the future of the novel at the University of Southern California, where, very scarily, I found myself sharing the platform with Apple supremo Steve Jobs, the President of Time Warner, and the founder of the MIT Media Lab and leading futurologist Nicholas Negroponte. I said back then, 18 years ago, that ebooks would only take off when they became as nice to read as the printed page, and a more convenient way of reading. So are we there now?

Some e-­readers can be read comfortably in broad daylight. A boon for elderly people is the ability to increase the print size. Recently, a soldier emailed me that he had just been posted out into the desert in Afghanistan and was taking all seven of my Roy Grace novels loaded on his Kindle -­ he told me very happily that he could never have carried all the printed versions in his rucksack.

In France, with my 3G Kindle I was never going to worry about running out of books no matter how long I was snowed in, but I have a feeling that despite the convenience of the ebook, the printed book that we know and love is going to be with us for a long time yet to come.

Looking ahead, I have quite a busy year:

The 8th Roy Grace novel, Not Dead Yet, will be published in mid May in Australia, on June 7th in the UK and in early November in the USA.

My travel plans include a UK book tour in June; overseas book tours in Germany and France during March; a full tour of Australia and New Zealand and South Africa during May; several visits to the USA, including talking at a medical and legal writers conference in Hyannis, Cape Cod in mid August; the Moscow book fair in September; the Gothenburg book fair; the new Glasgow festival; “Bloody Books” Sept 14-­16; and many more events yet to be firmed up. Make sure to check my Appearances page on my website regularly for updates on future events.

I’ve also had a very special invite from The Queen and Prince Philip to attend a reception at Buckingham Palace on February 14th to mark the 200th anniversary of the birth of Charles Dickens. So I will be hobnobbing with the royals!

In other news, we had the most fantastic response to the 2011 Hall of Fame photographic competition, with the results now decided. Do take a look on my website for the complete list -­ there are some brilliant entries.

I’m also delighted to report the winner of our Roy Grace quiz, compiled by Mastermind contestant Ken Owen, and the winner of our limerick competition. A number of people tied with the highest score; of those the overall winner has been selected as James Fitt by judging of the tie breaker limerick -­ leaving four runners up who are Frances Bisbey, Sue Lumsden, Nicky Stevens and Sue Wright. The winner of the separate limerick competition is Jacqueline Blake. Prizes will be sent off in the next week or so. Here are the limericks from our talented winners:

There is an Inspector called Roy,
Who is about to have a little boy,
But is this his first,
Or could it be worse,
Who’s the boy with the middle name Roy?

Detective Roy Grace was a Leo
His girlfriend a mortician called Cleo
His wife Sandy, presumed dead
Her appearance they’d dread
As the pair were becoming a trio

So, get your cameras out for good photo opportunities for this year’s Hall of Fame, and bone up on your knowledge of Roy Grace, as Ken will be compiling a new quiz to coincide with the featuring of the Roy Grace novels as his chosen Specialist Subject on Mastermind, which should air in the UK something this spring.