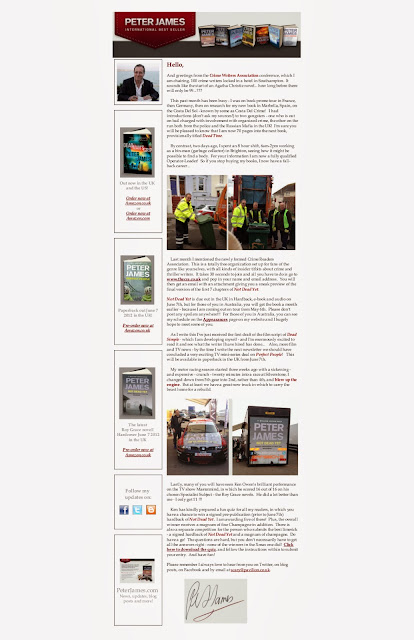 And greetings from the Crime Writers Association conference, which I am chairing. 100 crime writers locked in a hotel in Southampton. It sounds like the start of an Agatha Christie novel… how long before there will only be 99…???

This past month has been busy -­ I was on book promo tour in France, then Germany, then on research for my new book in Marbella, Spain, on the Costa Del Sol -­ known by some as Costa Del Crime! I had introductions (don’t ask my sources!) to two gangsters -­ one who is out on bail charged with involvement with organized crime, the other on the run both from the police and the Russian Mafia in the UK! I’m sure you will be pleased to know that I am now 70 pages into the next book, provisionally titled Dead Time.

By contrast, two days ago, I spent an 8 hour shift, 6am-­2pm working as a bin-­man (garbage collector) in Brighton, seeing how it might be possible to find a body. For your information I am now a fully qualified Operator-­Loader! So if you stop buying my books, I now have a fall-­ back career…

Last month I mentioned the newly formed Crime Readers Association. This is a totally free organization set up for fans of the genre like yourselves, with all kinds of insider titbits about crime and thriller writers. It takes 30 seconds to join and all you have to do is go to www.thecra.co.uk and pop in your name and email address. You will then get an email with an attachment giving you a sneak preview of the final version of the first 7 chapters of Not Dead Yet.

Not Dead Yet is due out in the UK in Hardback, e-­book and audio on June 7th, but for those of you in Australia, you will get the book a month earlier -­ because I am coming out on tour from May 6th. Please don’t post any spoilers anywhere!!! For those of you in Australia, you can see my schedule on the Appearances page on my website and I hugely hope to meet some of you.

As I write this I’ve just received the first draft of the film script of Dead Simple -­ which I am developing myself -­ and I’m enormously excited to read it and see what the writer I have hired has done… Also, more film and TV news -­ by the time I write the next newsletter we should have concluded a very exciting TV mini-­series deal on Perfect People! This will be available in paperback in the UK from June 7th.

My motor racing season started three weeks ago with a sickening -­ and expensive -­ crunch -­ twenty minutes into a race at Silverstone, I changed down from 5th gear into 2nd, rather than 4th, and blew up the engine. But at least we have a great new truck in which to carry the beast home for a rebuild.

Lastly, many of you will have seen Ken Owen’s brilliant performance on the TV show Mastermind, in which he scored 16 out of 16 on his chosen Specialist Subject -­ the Roy Grace novels. He did a lot better than me -­ I only got 11 !!!

Ken has kindly prepared a fun quiz for all my readers, in which you have a chance to win a signed pre-­publication (prior to June 7th) hardback of Not Dead Yet. I am awarding five of these! Plus, the overall winner receives a magnum of fine Champagne in addition. There is also a separate competition for the person who submits the best limerick -­ a signed hardback of Not Dead Yet and a magnum of champagne. Do have a go! The questions are hard, but you don’t necessarily have to get all the answers right -­ none of the winners in the Xmas one did! Click here to download the quiz, and follow the instructions within to submit your entry. And have fun!