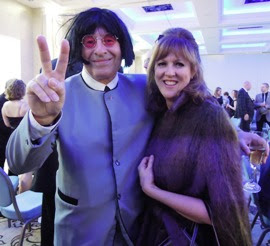 A charity murder mystery evening co-hosted by Peter James and held at the Grand Hotel, Brighton has raised in excess of £15,000 for local crime fighting charity Sussex Crimestoppers, more than doubling last year’s total of £7,000.

The evening was themed around the Mods and Rockers invasion of the seaside town during the 1960s, and the charity used James’ expertise to give it a special twist; all 23 tables were named after James’ novels. The money raised included £4,000 from auctioning the names of characters to appear in his next novel.

“We had a ‘dead good’ evening with a murder mystery for our guests to solve,” said James. “It was centred on a ‘cold case’ that Superintendent Roy Grace, the top detective from my novels, had been assigned. Our guests got into the spirit by dressing in 1960s style too. It has been a memorable night and helped raise a fantastic amount of money to support Sussex Crimestoppers important work.”

Kathy Burke, Chair of Sussex Crimestoppers, thanked local organisations who supported it and said: “The evening truly ‘rocked’ and we are absolutely delighted to have doubled the amount raised this year, we are so grateful to all the support we received from the residents, businesses and organisations of Sussex who helped make the evening so special.
“A huge thank you must go to the Sussex Crimestoppers manager and our willing volunteers who worked so hard to ensure that every last detail was as perfect, and to our patrons, Dame Vera Lynn and Dr Peter James, who give us so much support.”