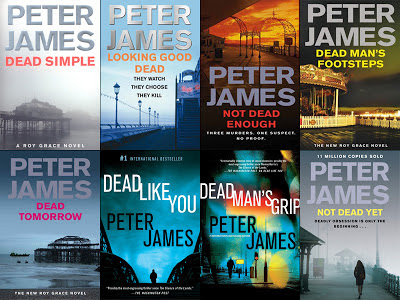 I’m pleased to deliver some exciting news to my fans in the United States! Starting now, you have access to ALL EIGHT of my Roy Grace novels in e-book format, available on Kindle, Nook and iPad.

Not many of you may know this, but in 1994, in addition to the normal print versions, Penguin published my novel Host on two floppy disks bound inside a hard cover, billing it ‘the world’s first electronic novel’. I don’t think any of us had expected the outrage it subsequently caused! I was front page news on many papers around the world, accused of trying to kill the novel. The Times had a very amusing piece, its journalist lugging his desktop computer and a generator down to the beach, to read Host in his deckchair.

Suddenly, and totally accidentally, I was being regarded as a leading ‘expert’ in this new arena, and asked to give all kinds of talks about the future. I was invited to be a keynote speaker at a conference on the future of the novel at the University of Southern California, where, very scarily, I found myself sharing the platform with Apple founder Steve Jobs, the President of Time Warner, and the founder of the MIT Media Lab, Nicholas Negroponte. I said back then, almost 20 years ago, that eBooks would only take off when they became as nice to read as the printed page, and when there was a more convenient way of reading them. The Kindle, Apple iPad, Nook and other eReaders have now made that a reality.

You can find the books online at the following links. Enjoy!