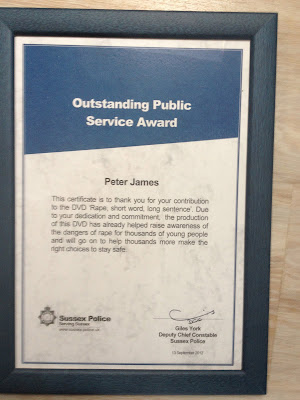 Three years ago when I was working on my 6th Roy Grace novel, Dead Like You which deals with the subject of rape, I had a great deal of help from the Sussex Police Rape Prevention team. Subsequently they invited me to join a think tank on the best way to get across the message of the dangers of so-called “date rape” to school kids. Although being dragged off the streets into an alley and raped is the common image most people have of rape, this kind of attack, known as “stranger rape” is extremely rare. Over 80% of all rape victims, female and male, are raped by someone they know. The effect is no less devastating – victims feel their soul has been murdered, and will have problems trusting anyone again for the rest of their lives. And the largest, most vulnerable group are the 14-20 year olds. We came up with the idea of a fifteen minute video, to be accompanied by lesson plans, and I wrote a script telling the story of three schoolgirls going to a party. One is hoping to meet the fit guy from school she fancies; one has arranged to meet a guy from school, who she also fancies; the third, less good looking than her friends, has arranged a date at the party with someone she has only ever met on Facebook. By the end of the party one of the girl’s will have been raped, and one of the teenage boys attending will be in prison. The title is “Rape – Short Word, Long Sentence.”

I had terrific help from the Film School of Brighton College, and two film students, Ollie Pothecary and Dave Thomas co-produced with me and directed the film. We had wonderful young actors from the West Sussex Youth Theatre, and JLS extremely kindly allowed us to use one of their tracks. The film has been rolled out to schools in Sussex, Surrey and Kent and the reaction we are getting from the kids watching it is fantastic, so I am thrilled. And as for that award – wow! Of all the awards I’ve been fortunate to receive, this one has a very special place in my heart.