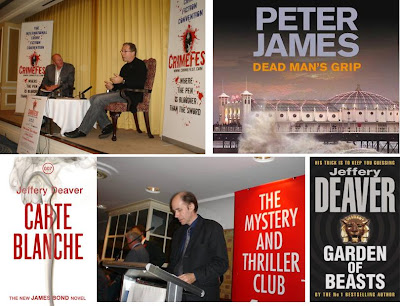 Like the plot of an Ian Fleming thriller, Peter James’ remarkable Roy Grace thriller Dead Man’s Grip the seventh novel in James’ highly acclaimed detective series set at the dark edges of Brighton, has pipped Jeffery Deaver’s James Bond re-boot ‘Carte Blanche’ from the top of the UK charts, by just under 800 copies as reported by The Bookseller this morning. This is made even more interesting due to the heavy supermarket discounting of the Bond Title –

James Bond has failed in his latest mission: to top the bestseller charts. Despite a bargain £5 deal at Tesco (75% off the £19.99 r.r.p.), sales of Jeffery Deaver’s 007 novel, Carte Blanche (Hodder & Stoughton), were insufficient to score it a number one.

The thriller, which sees MI6’s finest given carte blanche to prevent a terrorist atrocity, sold a solid 16,158 copies in its first three days on sale. It is strong enough for eighth position in the Official UK Top 50, but it falls some 797 copies short of the bestselling hardback fiction book of the week, Peter James’ Dead Man’s Grip (Macmillan), which also benefited from a £5 deal at Tesco. Carte Blanche’s sales figure is around a third of the 44,093 sales Bond’s previous outing, in Sebastian Faulks’ Devil May Care (Penguin 007), racked up in its first four days of sales in May 2008.

If you’ve not read either novels by Peter James or Jeffery Deaver then you’ve been missing two exceptional thrillers. Shots Ezine passes our congratulations to both authors for producing such exhilarating work, which is helping the cause of literacy in these crazy days.
Incidentally this year marks Peter James’ Chairmanship of The Crime Writers Association, the same organization that awarded Jeffery Deaver with the Ian Fleming CWA Steel Dagger for his remarkable novel ‘The Garden of Beasts’, which is what caught the eye of the Ian Fleming estate, and remains my favourite Deaver Thriller.