The pressures on independent bookshops show no sign of relenting – more than 200 have closed since 2009 leaving only 1094 still trading this year. The annual celebration Independent Booksellers’ Week has seen a range of initiatives around the UK, from a crime writers’ festival at London’s Goldsboro Books to the appearance behind the tills of bestselling authors including Ian Rankin, Susan Hill and Joanne Harris.

Writers from Michael Frayn to Deborah Moggach are celebrating Independent Booksellers’ Week by telling us about the local store they love. Take a look at their choices below – and to tell the world about YOUR favourite independent, submit a review to our interactive map of the UK’s best bookshops, in association with National Book Tokens 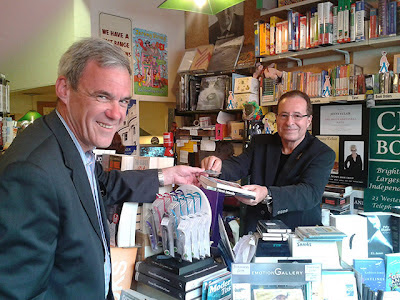 ‘City is one of the few independent bookstores left in my area. It’s one of those shops where you can’t come out without buying something; the staff are very knowledgable. Independents need to distinguish themselves from supermarkets and online through real hand-selling. Go into City and say you want a crime novel, and someone will talk to you about it. The shop also hosts a lot of events; I do several talks with them a year. I worked behind the till on Monday and learned how to do book tokens – and sold one of my own books!’

Peter James’ latest novel, Not Dead Yet, was published earlier this year