CHAIR OF THE CWA

Last week I flew back from Sydney where I was doing book promotion, landed at Heathrow and then was driven straight up to Darlington – 5 hours – where I received the huge honour of being made Chair of the Crime Writers Assocation. Following in the footsteps of many great crime writers, starting with John Creasey, through the likes of Ian Rankin and Val McDermid to the current chair, Tom Harper (pictured)

The CWA was founded by John Creasey, who presented the bell (pictured) which is handed on to each successive Chair to guard during his year in office. Now I wonder if there is a crime novel to be written about its theft…..!

It is a terrific privlege and I’m hugely looking forward to my year, and to really fighting the corner for the field of fiction I love so much. There is much snobbery in the so called “literary fiction” world about so-called “genre fiction” and I aim to use this year to break that down. I will also use it to do everything I can to save libraries in the UK from closure.

But I guess my No 1 priority will be to make sure I don’t lose that damned bell…… !!! 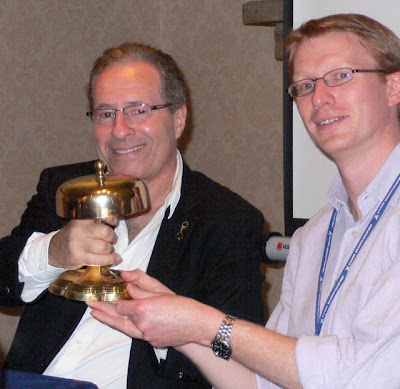