BOOKED ON MY BIRTHDAY… 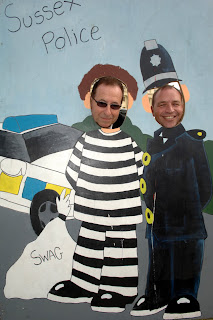 Well, I guess not many people end up in the stocks on their birthday…! But there I was, nobly on parade on Brighton seafront at 10am on a Sunday morning in order to formally open the Sussex Police, Fire and Ambulance Services 999 fun day, in aid of the quite wonderful Martlets Hospice in Brighton and Hove.

The photographer from the local paper The Argus (of Kevin Spinella fame, those of you who know my books) decided it would be hugely funny to have me in the stocks as a villain, alongside Inspector Richard Delacour, from Brighton and Hove Police, who organized the whole event. Then, as we were standing there, member of the public thought it would be huge fun to start pelting us with wet sponges… now you would have thought they’d have had a go at the police officer – but no, who was their prime target? Muggins me. Hope it wasn’t a new form of literary criticism….

But it did make me think, wouldn’t this be a fitting punishment for some of the recent rioters and looters?????