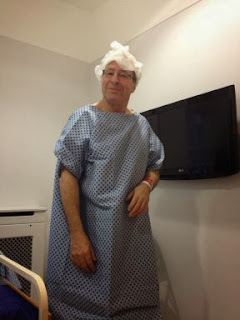 Best-selling author Peter James might need to call his latest work Dead Funny after releasing a photo of himself with pants on his head.

The Brighton writer has been in hospital in London for surgery on Carpal Tunnel syndrome on his wrist.

The injury is thought to have been caused by his prolific writing.

The author thanked his fans, who had sent him messages of support, by releasing the photo – complete with pants on his head.

He posted on his Facebook page: “I thought you’d like to see this pic of me this morning, pre-op!

“I didn’t realise these were underpants – I thought it was a hygienic hat I was supposed to wear – the nurses were very amused.”